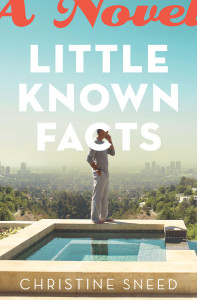 Christine Sneed was named a finalist for the 2010 Los Angeles Times book prize in the first-fiction category. Her first book, Portraits of a Few of the People I’ve Made Cry, won AWP’s 2009 Grace Paley Prize, was awarded Ploughshares’  John C. Zacharis prize, and was chosen as Book of the Year by the Chicago Writers Association in the traditionally published fiction category. Portraits was also longlisted for the Frank O’Connor International Short Story prize. Her second book, the novel Little Known Facts, won the Society of Midland Authors Award for best adult fiction 2013, was named one of Booklist‘s top ten debut novels of 2013, and best new book by a local author by Chicago Magazine.

I interviewed Christine Sneed at Sanibel Writers Conference about writing, rejection and success.

I understand you write from the title.

Not always. Often, when I was a poetry MFA, I was also writing short stories, more than long form fiction like novels, and I usually did have a title first. With Little Known Facts, and my next novel, Paris, He Said, I did not have the title first. My editor suggested the title, Paris, He Said and I finally said ‘fine’ because I had already suggested a 100 other titles. One title that I suggested to my editor, Paris Gare Saint Lazare, the editor said, ‘Well, if readers don’t know French’ and I understood that this could be off-putting.

But yes, I do usually like to start with the title. The chapters in Little Known Facts I came up with before I started each chapter.

Some do. Not everyone, but I’ve heard that, and I’ve heard my students say that too.

When you come up with titles, do you already have a narrative going on in your head? How do you decide on those titles? What is it that pulls you in that makes you decide that’s the title?

You know, it’s often that I like the sound of the word. For example, the first chapters in Little Known Facts: “Relations,” “Flattering Light,” “Meaningful Experience,” and “The Finest Medical Attention,” I liked the sounds of those words.

Also, I had a character in mind. I usually don’t have the situation right away, but my characters are forming. They are going to do something related to the title, and this will impact the story, if it makes sense in that context. In “Flattering Light,” in the end of that chapter, I have them go into this jazz club, and the light is very flattering, but the title also has more than one meaning. If possible, I like to have more than one meaning for a title.

And does this go back to your poetry roots? I thought the first chapter was just going to be a story. Then by mid-March, I realized I wanted to write a book about these characters, like a whole collection of voices in novel form.

I can see why you’re attracted to it. It reminds me of poetry.

It’s like a sign post. I know the territory a little bit. I have some sense of theme, part of the subject matter or how to describe a character. A lot of people are also attracted to interesting titles. Dave Eggers’ first book was A Heartbreaking Work of Staggering Genius. It was meant to be ironic, so people were laughing, and asking just how seriously should we take ourselves?

It depends. I write ideas down for titles that I go back to it years later. I keep a couple of notebooks, and sometimes I work on an idea right away, or something that’s in progress, but for short stories, it depends how excited I am, and how much time I have. It can be anywhere from a week to a couple of months. In a few cases, I write half of a story and put it aside for a couple of years, and go back to it later, and I think this is better than I thought. In general, if I’m focusing on a short story, I’m finishing a draft in a couple of weeks.

What is your time period for novels?

That’s different because it depends on how much revision you have to do. Little Known Facts I wrote over a period of a year, but the thing is, I wrote the first chapter in the fall of 2010, over a couple of months, but then the last ten chapters I wrote from March to July 2011, so it only literally took five about months to write that book, but then I had to do a little revision. We sold it in September 2011, so it was a year from when I wrote the first chapter to when I sold it. I was not writing it continuously; from early November to mid-March, I wasn’t working on it. I thought the first chapter would only be a story. Then by mid-March, I realized I wanted to write a book about these characters, like a whole collection of voices in novel form.

Your novel reminds me of hearing about Jon Voigt’s life, and people like that in the very beginning of the book; it also reminded me hearing about Shirley Jones’ husband. It’s very similar to what you’ve done on the page, and what I’ve heard about Hollywood families.

To be someone related? But neither Will nor his sister, Anna, is famous. They live quiet lives and want meaningful lives. “No, let’s take the offer. I’m happy and I feel very good about them.” Then the book got published, and got on the cover of the NY Times book review.

But I think you captured that well.

How hard was it for you to sell that book?

You know I was lucky, because I had an agent. I had two other agents before I worked with Lisa at ICM, who is still my agent. I’ve written a few other novels and a lot of short stories, and I had an agent in the early 2000’s, whom I had a novel with that I revised several times, but we didn’t sell it. Then I had a collection of stories that she went out to only a few publishers.

With Little Known Facts I had been working on another novel called, 0 Husbands! which was a satire. It was about psychologist around the age of 30, who decides that in order to have domestic happiness, you should have three husbands. They rotate in and out of the house. Obviously, she’s crazy; she thought it would work. With this manuscript, I found my second agent, Paul Cirone, who is really a nice guy, but he ended up leaving the industry.

He had been working as an agent for about 15 years. But I was very lucky that the agent—of a friend—contacted me on the same day that Paul called to say he was leaving the industry. The agent looked me up online and contacted me; “Do you have anything I can look at? A new book?” I responded: “I have three chapters of a new novel and I want to write a couple more before I show them to you.”

Another agent had queried me, and I had sent him work that each time he rejected. I think he was considering Little Known Facts, but after I had sent him the first three chapters, his assistant said, “Oh, this is good, but these chapters read like short stories and we need a novel.”

The agent who contacted me read five chapters of the same manuscript when I had them ready. We had talked about her representing me after she read the five chapters, so I wrote the rest of the book knowing she was going to represent me. She liked them a lot, and was very supportive of the book. I finished the book and I did a little more revision after she read it, and then she sold it within a few weeks. She submitted it to 12 publishers. Five of them still hadn’t replied, when Bloomsbury made me the offer. When I talked to the editor, she was very excited about the book, and really didn’t want much changed.

Most literary work doesn’t get much of an advance. It’s not like what you hear about—Oh, so and so got a million dollars—you’re lucky if you get twenty thousand. 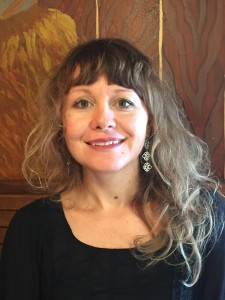 I was happy. Lisa said, “They’re a great press. We can check with these other presses while we’re still waiting, but I said, “No, let’s take the offer. I’m happy and I feel very good about them.”

Then the book got published, and got on the cover of the NY Times book review. It’s done fine; it’s been critically well received for the most part. There have been a couple of catty reviews. Part of it, probably, is because I wrote about Hollywood, and people are saying, ‘How dare she!’

So, I was very fortunate. I’ve been writing for more than twenty years now. That was my fifth or sixth long-form fiction manuscript. I’ve been publishing short stories, and I’ve been teaching more than full-time, because as an adjunct you take as many classes as you can get—adjuncts don’t make a lot of money. Bloomsbury will also publish, Paris, He Said, my third book and second novel in May (2015). At the same time, they acquired another book, a new story collection, The Virginity of Famous Women. It’s coming out a year or so after the new novel, I think, but I’m really not sure when it will be published.

Now the story collection, is that from previous published work, or new stories that haven’t been published?

Most of them have been, but not all of them. In fact, usually in story collections, you publish new material, unless it’s a collected stories by a well-known writer. You always published new work in book form. But most of them (my short stories) have been published in journals previously. Nancy, my editor, wanted some work that hadn’t been published, so I might have to write new pieces to change that. I’m happy to do that.

Next week is the continuation of my interview with Christine Sneed. Find out about her rejections, her insights, advice to other writers, and about her upcoming book, Paris, He Said.