GABRIEL LONDON is a documentary filmmaker whose storytelling focuses around major policy issues. He began working on criminal justice issues as an undergraduate at Pomona College, where he won the Albert R. Broccoli film award for a prison documentary, Turned Out. In 2001, he produced and directed No Escape: Prison Rape in America, two short films that accompanied the Human Right Watch Report of the same name, which were honored with a Soros Criminal Justice Award. In 2004, he produced Drew Barrymore’s MTV documentary about youth voting, The Best Place to Start, and produced and directed the video documentary short, Based on a True Story: The Making of ‘Monster.’  For Spike TV in 2008, he directed Snoop Dogg’s autobiographical streets to prison story: Youth Authority: California.

He is a partner, and creative director of Found Object, where he conceives of content and strategy for Corporate Social Responsibility and Non-Government Organization clients seeking to create a public impact. 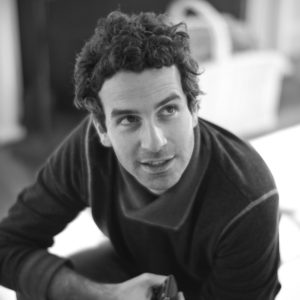 His latest documentary, The Life and Mind of Mark DeFriest, has won numerous awards at film festivals from best documentary feature to audience favorite.

This is the second half of my interview with Gabriel about his latest documentary, The Life and Mind of Mark DeFriest.

What made you decide to choose your beginning?

I love the movie La Femme Nikita. I actually don’t love it that much, but it’s an interesting movie where you have the super gifted lead character. She’s an orphan with all these incredible talents, but she is also a psychological basket case. The government uses her talents as a spy and a hacker, to become an assassin. So instead of jailing her, they use her. They interview her in the beginning like a wayward youth in trouble and then they guide her into this program and make her a super spy.

People always come up to me after they see the movie about Mark, and they say, ‘why didn’t the government learn he was so brilliant and make use of him?’

But Mark also never trusted anybody. He never understood who his friends were in the system.

What made you decide to use animation for the flashbacks?

Two things. One, Mark became this incredible illustrator in prison and I thought it was fascinating. The other, he is this archetypal comic book character type. Do you know what I mean? The death of the father, the supernatural gifts that are also his tragic flaws. The facts are fascinating to me, and the Houdini narrative is like a typical comic book. The other thing is, I felt that I owed it to audiences to bring back to life these incredible things he had done. I didn’t want to leave that in the interview setting; I wanted people to be in the moment with him.

It was also important in creating a sense of thrill, but also of empathy for him with some of the choices he made.

How did you come to the type-written backdrop to tell the backstory?

That was our unique contribution to animation, and layered storytelling. I think it’s important to corroborate things. Mark says in the film, “My prison file is two and a half feet thick and reads like a James Bond 007 spy novel.”

Are you going to believe the prisoner? Not necessarily. You’re not just going to believe Mark if he tells you his file is like James Bond, but then you open it up, and what does it say? It has all this stuff in black and white, all the transcriptions of what the officers said he said. He would not only be caught with contraband, and all these clever things he was caught with, but he would also repeatedly say that he was James Bond. So I thought this was an amazing way, if we can do this consistently, to bring the institutional voice into the film, while corroborating Mark’s stories.

I had a hard time getting guards and prison officials to go on the record, and I also didn’t want to ring any alarms before the film was done; it would have impacted it, but I put ads out in the paper in Starke, Florida looking for people who knew Mark, but I never got any replies.

I wanted to basically find a way, in black and white—and what I mean by black and white—is official records, I wanted to bring them into the movie to inform the animation, so you feel that both have a source of corroboration, but you also have a source of the official voice. So the Florida Department of Corrections has a voice, or the Florida State Hospital would speak in the film. There’s a lot of archive in the film, but generally archive in film means not documents as much as footage. There are certainly other documentaries that use it. But for us, it’s the multiple layering of things, and the collage that was really successful.

What were the guns called that he made? 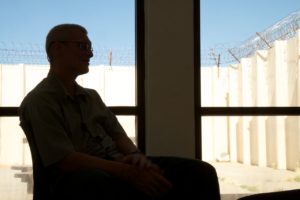 What was the music player he made called?

How did he make the music player?

Basically, the guys on death row, which was the floor below him, were allowed to have Walkmans. The guys above were on disciplinary confinement status and beyond that, and they weren’t [allowed walkmans]. When those guys were executed, they would actually leave their radios to Mark, and the cell porter – an inmate trustee – would bring them in, and put them on the food slot. Mark would have to work very quickly to get them small enough to be hidden on his person. Basically he had a way of taking the one-sided circuit board of a Walkman, and taking off half the circuits, and creating a much smaller circuit board, double sided, re-soldering the backside and then he could sheet it in plastic, and basically hide it on himself.

Then he always had music, and music was a lifeline for him. He just loves music; it speaks to him. A lot of the lyrics are super important to him. A lot of the stories were outsider stories, like Pink Floyd, that had that kind of sense of alienation, which he related to.

What camera did you use to film your documentary?

I used seven or eight different cameras. We started out with a Sony PD150, Canon, Panasonic DVX100, Panasonic HVX100, which was the first HD one that we used. We used the Sony FS1 for interviews I think. We used the Canon 5D. I think that’s about it.

Which one was your favorite?

Honestly, I think the Canon 5D for the interviews, because it saturates so beautiful; the colors are so rich.

When Mark’s psychiatrist, Berland, asked Mark if he thought someone was after him, and Mark said yes, it made perfect sense considering his prison ordeal. How could they label him mentally ill based on that question when you consider what life is like in prison?

Many people who have seen the film come up to me afterwards and say that Mark might have autism or Asperger’s syndrome. Autism and many of these disorders really didn’t get diagnosed until later. I think if they just realized what was going on with Mark, they would have thought of Asperger’s, and then things would have been so different. They didn’t think about it back then.

I think Mark above all else valued survival. He really thought it was a mortal fight. They were trying to kill him from the first time he escaped; they were shooting at him. I think he took the notion very seriously, that they didn’t care if he lived or died. He would do things that were humiliating for him in order to survive.

What is the psychological test that they used on Mark?

It took 13 years of your time to tell Mark’s story, which is only a third of the time Mark spent in jail; Florida’s parole commission voted yesterday to cut his sentencing from 2085 to March 2015. How does it feel to know that your film helped influence Mark’s prison release date?

It feels nothing short of incredible. A lot of people have put their faith in this storytelling process, not the least of whom are Bonnie [Mark’s wife] and Mark, but also all the audiences around the country that have seen the film and called for Mark’s conditional parole release through our Court of Public Opinion voting process. Those people are all so proud. They have a measure of faith restored in the system’s ability to listen to their voices and the real, and clear evidence that Mark DeFriest deserves something better. Is this story over? No. Does it have a happier ending in the works? Absolutely, yes. What a feeling.

What are you working on next? Is there something rolling around in your mind?

Yes, finding a story I can look at, I’m really interested in, about accountability in our culture. I think there is a class of people, a political class, as well as an economic class that is having a very hard time being accountable to other people.

We have a country where the biggest companies are looking for ways they don’t have to pay taxes. We have leaders in many cases that have overseen giant foreign policy blunders that refuse to look back on it with any kind of critical eye.

Then with the criminal justice system we have, there have been nearly 1500 people exonerated, yet there is no national conversation about accountability. Who put 1500 people, who were innocent, behind bars? I’m very interested in actually rooting out the source of the problem that we have in this country as opposed to just pointing them out when the symptoms become so undeniable.  I would like to walk back in the story, not Mark’s story per se, but I’d like to walk back to the slow drift of democracy and its values. That would be a 300 page book, but for a movie I’m looking for an individual story, or maybe three stories of a lack of accountability.